Posted on September 10, 2012 by journeyingjoyously

Last evening’s Albergue was not the best. There were 18 beds in a 8 x 12 room that was up three flights of stairs. There was one washroom and two showers. We had to lean out the window to hang our laundry on the line.

Our group was hurting. Janet was recovering from her altercation with the brambles and the rest of us had colds and blisters. I had the top bunk up four steps and closer to the ceiling so it was hot. The room was stuffy but with my ear plugs in, I slept well. I did get up at least once to use the washroom although Elena said it was twice, so I may have done a little sleep walking. (Ha! Ha!) I know I only went down the ladder once as climbing up and down was hard on the feet. Janet poked me awake at 7:10 am. I told her she was joking with me, that it could not be that late to start walking. Her reply was, “Well, you set whatever time you like then, but I am getting up and on the path.

The sun had already risen as I left the village of Navarette.

During the previous evening, I realized that I could not do another 18 to 20 km day, so I decided that being a Sunday, I would walk 7 kms to the next village of Ventosa and spend the day resting and relaxing to let my blisters and my cold heal.

It was a lovely morning walk thru the vineyards. By 10 am I had reached Ventosa. There was a bar open and it was nice to have two cafe con leches and rest. The other three members joined our table for a break before they continued on. We talked about our crappy Albergue, how hot it was and rethinking the whole aspect of staying in albergues. Our conversation then switched to drinking water and the color of our pee and if you don’t pee all day you need to be drinking more water. We bid happy walking to the three continuing on and Janet, Paivy and I walked down to where our Albergue – the San Saturnio was. There was a sign on the door that it would open at 2 pm. Waiting at the entrance was a lady who was from Ottawa, Canada and she had also planned to have a rest day. Just as we were leaving to go back to the church, the door opened and the owner came out. We asked if we could place our bags inside and return at 2 pm for check in. He agreed. The four of us put our back packs in the main lobby. It was 10:34 am.
The mass at the church was beginning at 11 am. I thought that I needed to go because I had
“lifted” (Elena that word is for you) three bunches of Rioja grapes from the passing vineyards which had provided my breakfast and vitamin C for my cold. The Spanish mass I did not understand but it was beautiful to listen to the singing. At one point I was standing listening to the music with my eyes closed. When I opened them moments later, I was the only one standing. (oops!) Two observations: all the 36 women in attendance sat in the front and there were about 18 men who sat in the back seats. When communion was given only two men walked forward whereas most of the women received communion. So, my thought is, the men must have had a perfect week – no sinning – whereas the women must have been really contrite or maybe their conscience is much stronger than the men???!!!

I thought I had my day planned, what I did not plan for was the unexpected. I had spent the three hours relaxing and talking with Cathy and writing the first part of this blog. Cathy left about 1:30 to go stand in front of the Albergue to make sure our places were secure. I walked in at about 1:45 where Cathy met me at the door saying, “we got to go, this place is full” I protested greatly, “how can that be, it is not yet 2:00 pm. The sign on the door said, 14:00 – is that not 2:00 pm. “Yes”. Cathy replied, “but, the doors were open at 1 pm and it is now full.” Just then the taxi pulled up. Seven of us piled in and we were off to Najera. The first Albergue was full but as we were on our way to the municipal Albergue, Cathy stopped a couple and asked where they were staying and they took us to another private Albergue where Cathy and I shared a private room with twin beds and the bathroom and shower down the hall.

After checking our packs, we went in search of food. We were close to the Monastery of Santa Maria la Real and were able to take a tour. 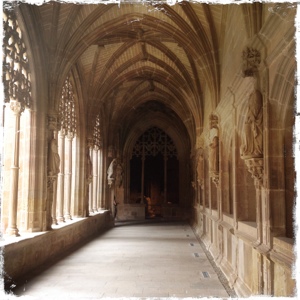 I have a detour planned for tomorrow with Cathy and Kevin.
For now I want to wish Margaret the very best with her surgery. Speedy recovery.

Mother, ESL mentor, enjoys the beauty of nature, strives to elicit gratitude, joy and bliss day by day while on the adventure of being human.
View all posts by journeyingjoyously →
This entry was posted in Travel and tagged el Camino, solo, walking, women. Bookmark the permalink.