Posted on September 9, 2012 by journeyingjoyously

The last few days it has been hard to secure rooms at the Albergues because of the number of pilgrims traveling at this time of the year. Last evening at the plaza Rogerio, Janet and I joined forces with three other women who were traveling that we had met previously, Gabrielle, Elena and Paivy. There is a festival in Viana and a rally of some kind in Logrono so it is very difficult to get rooms. Since Elena is from Spain, she spent a great deal of time calling albergues but all were booked. We then decided to walk as far as Viana a distance of 18.6 kms then take the bus to Navarette. We were able to book six beds. We did this in hopes of getting ahead of the large group of pilgrims and then more beds would be open.

And sometimes these decisions prove to be the best in hindsight. We set off early at 7:45 am. It was cool which made the walking easier. Paivy was not feeling well so she caught the morning bus to Navarette and was going to rest for the day. The first part of the walk was easy going but since it was way early, there were no bars open for cafe con leche. The sun provided a wonderful sunrise.

The walking was wonderful but as the sun rose higher in the sky it became hotter and hotter. We walked thru the area that had been destroyed by wildfires earlier this year.

We were about 2 kms from Viana and were anticipating the first cafe con leche of the day plus some food. We had just come down a steep incline and the path turned sharply to the right. Elena and I were trailing Gabrielle, Janet and Rogerico. All of a sudden this cyclist came down the hill and turned into the corner. I had yelled “bike” but those ahead did not have enough reaction time to move out of the way. Janet lost her balance and fell to the side which was covered in brambles. Her legs were scratched and there was a puncture that was bleeding quite a bit. Gabrielle took charge and applied pressure to stop the flow of blood and cleaned the scratches. Elena felt that Janet should get checked by medical people to assess the injuries. We were planning to get the bus to Logrono but Elena stopped some of the villagers in Viana and was advised that there was a medical facility. They even took them there. What we did not realize was that this weekend there was a festival taking place. All the local people were dressed in red and white and there was lots of music and parading thru the streets. 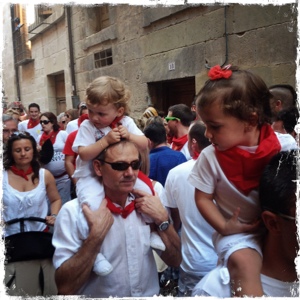 Janet was advised to rest her leg. Since we could not get any albergue in Viana, we ordered two taxis to take us to Navarette. There was a couple who could not find an Albergue so we (Janet and I) offered them to share our taxi as far as Logrono, then take us to Navarette. By the time we got to Navarette, the others were at the bar having tapas and cold drinks which were the first for the day.

While having refreshments, we saw Edith from Holland whom Janet and I first met at Orisson. She too remarked on the huge amount of pilgrims and how discouraged she was. She was just short of being 4 months on the road.

Janet is ok and wants to try walking for a bit tomorrow and then see where the day takes her.

Mother, ESL mentor, enjoys the beauty of nature, strives to elicit gratitude, joy and bliss day by day while on the adventure of being human.
View all posts by journeyingjoyously →
This entry was posted in Travel and tagged el Camino, pilgrimage, solo, Travel, walking. Bookmark the permalink.