Posted on August 29, 2012 by journeyingjoyously

All was quiet as I slipped down the circular stairway from my room to reach the outer wall and down to the mud flats. Before breakfast I wanted to walk to a small island that I had seen the evening before. To my surprise, during my night of slumber, water had crept into the channel and the island was surrounded by water.

I meandered back toward the fortress watching the sun catch the water in the channels and the light and shadows on the abbey. I also kept my eyes peeled for treasures in the mud. The skies were clear and I thought that by evening I would be able to capture a phenomenal sunset shot.

The shops were opening their doors and the first of the day’s tourists were starting to arrive as I sat on the outer wall enjoying the sunshine and breakfast of eggs, cheese, crusty baguette and cured salmon. Once fortified, I browsed the shops making my mental wish list of the purchases I would make if I wasn’t traveling light. I did purchase some post cards and a few prints of the island and thanks to a post office located just inside the drawbridge entrance, I mailed a few mementos back to Canada.

There are four museums located within the fortress, a historical, a fantasy light technical show, historic home of Bertrand Duguesclin, Knight in the 14th century and his wife, Tiphaine de Raguenel, a famous astrologist who read the destiny of the world in the stars. Must have been a interesting household!! The fourth museum is a Maritime Museum showing the tidal phenomena and a collection of 250 model boats. Since I didn’t have time to tour all and walk the abbey too, I chose the historical museum covering 1,000 years of history, the monks who lived and dedicated their lives to the building of the abbey. I found out there were numerous medieval instruments of torture and captured a picture of a bed of nails high up above in the wall by wheel for lowering the drawbridge.

As I was negotiating the alleys, stairways and crowds, I spied a single older woman wearing a lovely red hat. I commented, “What a lovely hat!” For the first time in several days, she answered back in perfect English, “Thank you, it is just great because I can squish it up for packing”. Suzy was from Australia and was traveling with her 77 year old mother. We chatted about what we enjoyed about France and the places we had journeyed through. She enjoyed Bordeaux and the area around Carcassonne. We walked and chatted for about fifteen minutes and since she had already toured the abbey, we went our separate ways.

The abbey! It is hard to find words to describe a magnificent structure that was constructed over 1,000 years ago.

My fascination was with the doors of all shapes and sizes, the markings on the individual doors and the hardware. The cloister was lovely with the intricate detailing at the top of the moldings, each one a different leaf or flower. Thank goodness the way was marked as there were many twists and turns and ups and downs. The view of the surrounding area was grand. You could see the area of France across the channel and in the distance sheep grazing. 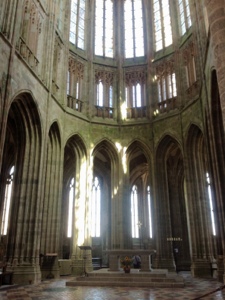 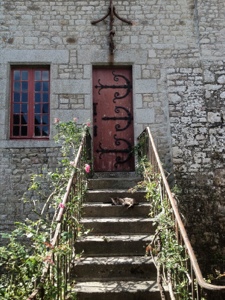 After a tour of the abbey, it was too early for supper so I decided to walk around the fortress before enjoying my evening meal. I was surprised how much the channel was filling from the tidal waters. It was very zen strolling the mud flats and hearing the chants from the abbey floating downward. I did not see any monks or clergy persons during my tour but the chants were a delight to hear.

I found a few treasures in the mud and since I was traveling light I left them together with a grouping someone else had left behind. Since the clouds had rolled in and the skies were threatening to rain my picture of the island by sunset will have to be enjoyed by the postcard I mailed back to Canada.

I could have easily spent another day touring the other museums. As there is easy access from Portorson and even from Rennes, doing day trips would be feasible from cities farther afield. There were signs for several other attractions in Portorson which could be incorporated with a visit to Mont. St. Michel. If you get the chance, you will not be disappointed with a visit .

There were three people who added joy to my day.

The first, the cleaning woman who noticed my frustration in not being able to get out the front of the hotel because of a locked door, showed me how to reach the outer wall by a back entrance. There must be many of these secret passages within the walls. Even from the outside in the back facing the channel, I could see pathways leading up the hill. One area had been blocked off with a chain to keep curious people like me away.

The second, a young boy from Antwerp who was fascinated with the iPad and I was able to share a conversation with him, his mother and grandparents who were on vacation.

The third, the lady with the red hat

Mother, ESL mentor, enjoys the beauty of nature, strives to elicit gratitude, joy and bliss day by day while on the adventure of being human.
View all posts by journeyingjoyously →
This entry was posted in Travel and tagged France, Monastery, Mont St. Michel. Bookmark the permalink.