Posted on August 29, 2012 by journeyingjoyously

Today, August 28th, is a travel day as I continue southward thru France. Left Mont St. Michel via bus. Enjoyed the French countryside of rolling hills, many, many fields of corn, grazing cattle, and fields of baled hay which reminded me how alike various parts of the world are. I spied distant church spires indicating villages. There were apple orchards and what I think were choke cherries and garden patches. I am just not fast enough with the iPad. By the time I get in position for a shot, the bus has already passed and, consequently, I have deleted lots of pictures of trees flashing by.

There was an hour to get a snack and a half a cup of coffee and pay .40 euros for a bathroom break before boarding the train to Nantes.

Another hour wait and then boarding the 14:13 train for Bordeaux, a four train ride. This train was packed. And…when I was unsure of my dates when purchasing the tickets, the agent did not give me a seat number…I became a “train seat floater”. This means I could sit in an empty seat until the person boarded with that specific seat ticket, then I would have to move to another seat vacated by someone who had left the train during one of the stops.

A young woman who I sat beside for the longest explained the seat situation to me and how there is a fluctuation of prices depending of the time of day you travel. She also explained that there was only the one train line down the coast of France, so between the larger centers the trains are crowded. Also, being the end of August, a lot of people are ending their vacations and returning home.

I will have three hours in the morning to take a quick tour of Bordeaux. Here are a few shots taken going back to my hotel after eating supper. 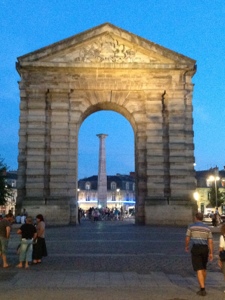 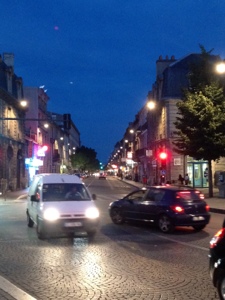 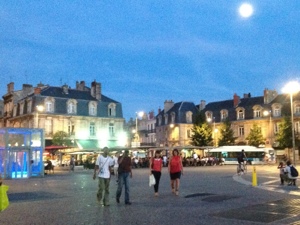 Mother, ESL mentor, enjoys the beauty of nature, strives to elicit gratitude, joy and bliss day by day while on the adventure of being human.
View all posts by journeyingjoyously →
This entry was posted in Travel and tagged Bus, France, French cities, train, Travel. Bookmark the permalink.