Posted on October 7, 2012 by journeyingjoyously

Having gone to bed early, everyone was up and ready to walk by 6:00 am. Mary and Rachel left together as they walk at a faster pace and Mary had a head lamp. I had my yogurt and nuts before setting out with Sabina who also had a head lamp and I was able to follow behind her. There had been rain overnight but the morning air was warm. I could hear frogs croaking and the occasional dog barking. As dawn approached, the birds started their chorus to greet the new day. Also, the haunting hoot of an owl and a corresponding answer to the call as they bid the night goodbye. Dawn was just breaking as we entered Portomarin.

Portomarín was an important pilgrim town on the medieval route to Santiago, but the town which pilgrims see today is not the one that their medieval counterparts knew; the old town lies buried beneath the waters of the Belesar Dam Reservoir, completed in 1962. Before that occurred, however, its most important historical buildings were dissassembled stone by numbered stone, transported to the new town on the hill overlooking the reservoir and there rebuilt.

To enter the town, we had to go up the steps of the Roman arch which had been reconstructed at the entrance to the new bridge. 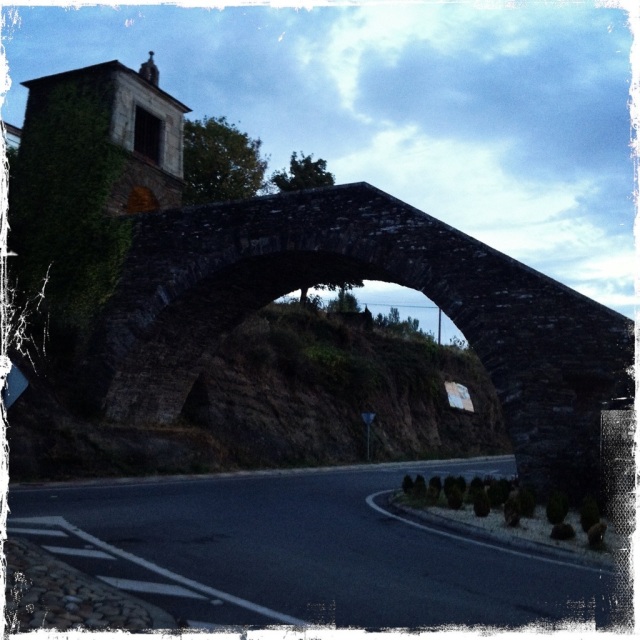 The sun was painting the clouds a rosy pink as we climbed the stairs in search of cafe con leche. 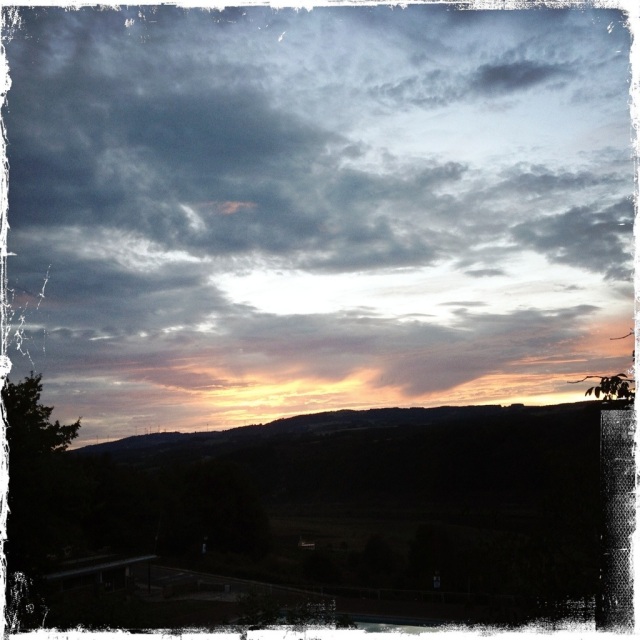 After coffee, Sabina continued walking and I wandered around the town hoping to find a taxi and have a look at the Church of St. Nicholas. This large, fortified Church of St. Nicholas that overlooks the town´s main square was one of the historical buildings that was moved stone by stone. Built sometime in the late 12th or early 13th centuries, it once belonged to the Knights of St. John and served as both a church and a fortress in times of war. Unlike most churches of the period, it is composed of an enormous, single nave that impresses by its sheer size. The transition from the Romanesque to the Gothic is apparent in the church´s architecture. 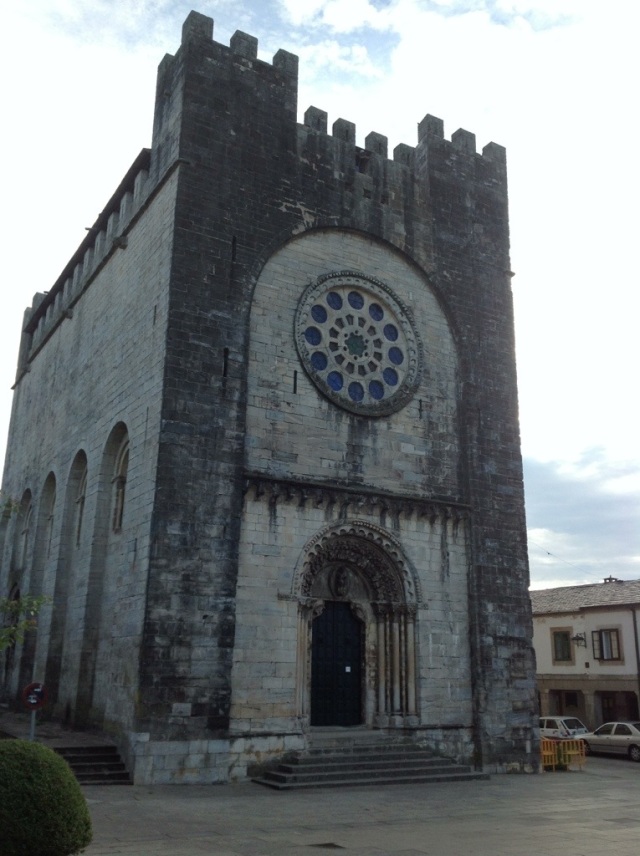 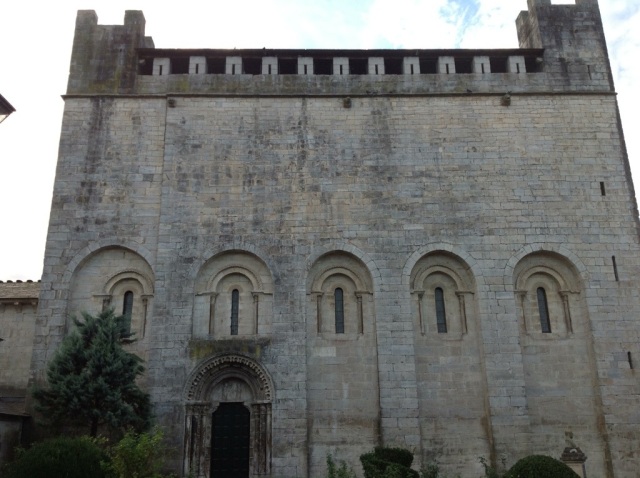 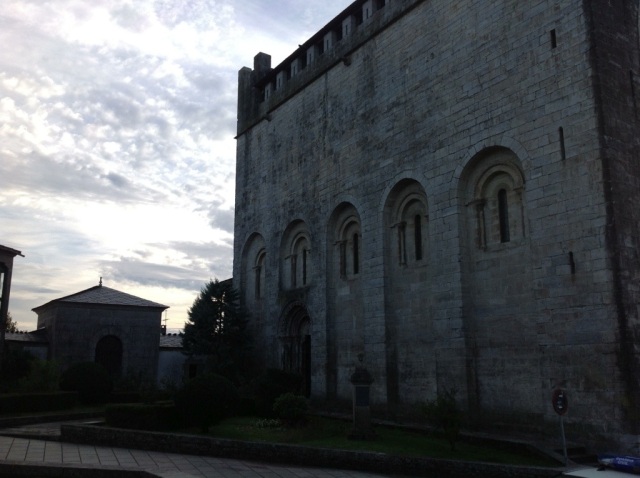 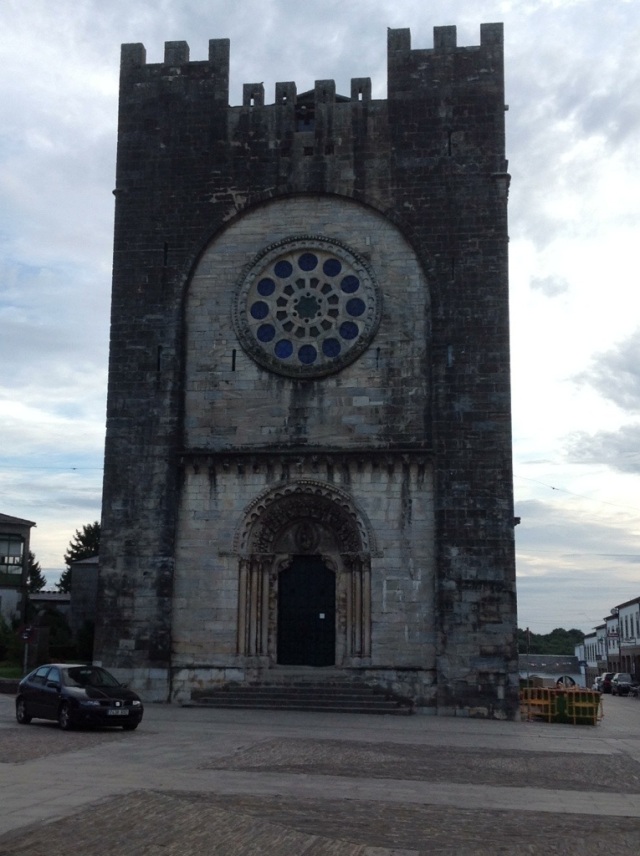 I wanted my resting place for the day to be Palas de Rei but I wanted to see the Vilar de Donas. I took a taxi to this Romanesque church and from the church I was going to walk the 8 kms to Palas de Rei. Just as I arrived at the church a tour bus also pulled up. I was able to see the church and also attend an English mass as the tour group was a Benedictine group from England who had stopped at the church for mass before continuing on to Santiago. This Romanesque church of the first quarter of the 13th century, declared a Historic-Artistic Monument, was part of the old monastery located there, belonging to the Order of Santiago. 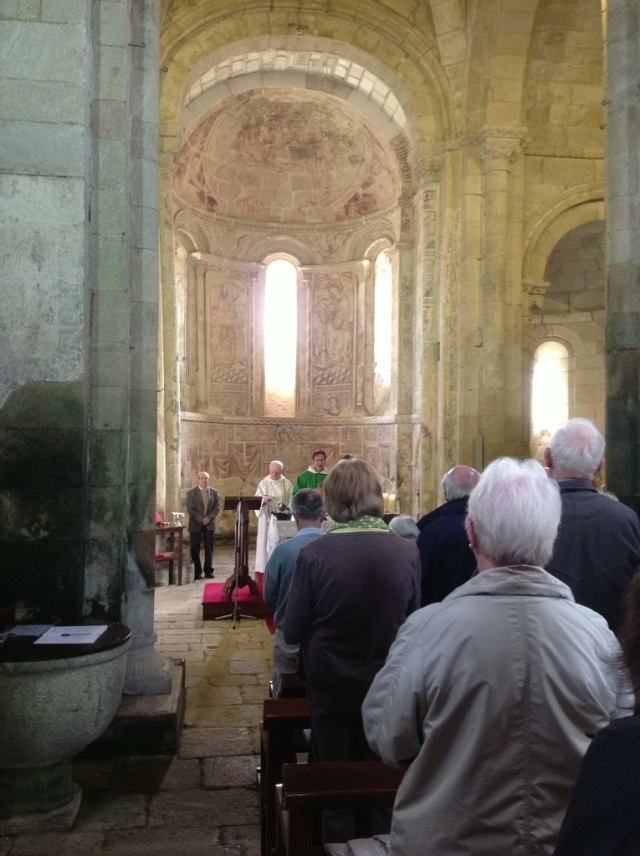 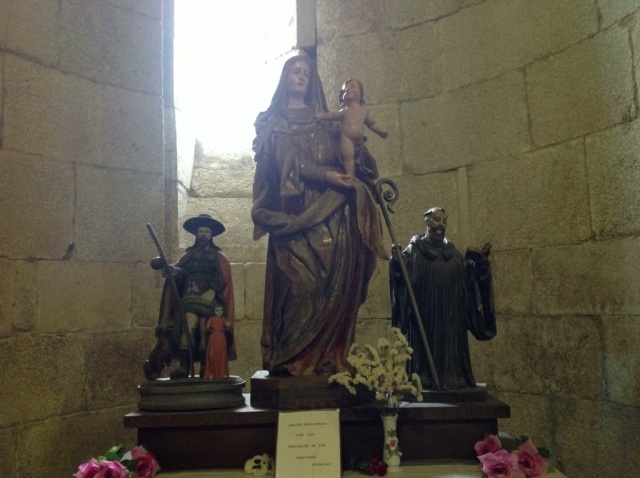 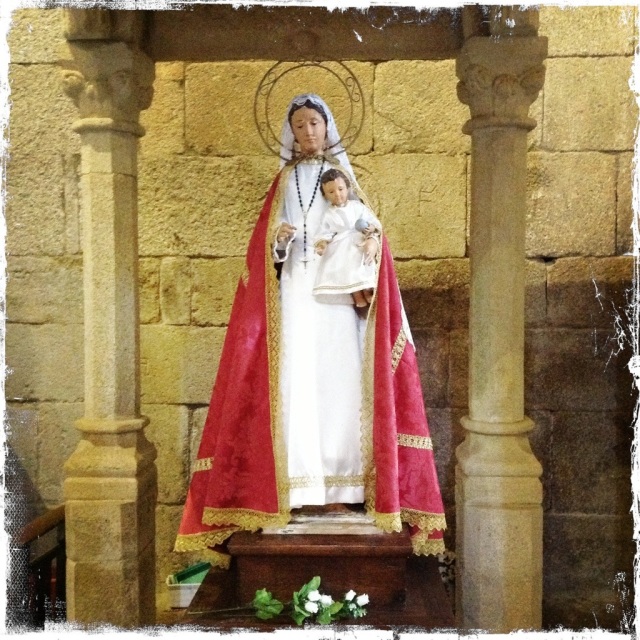 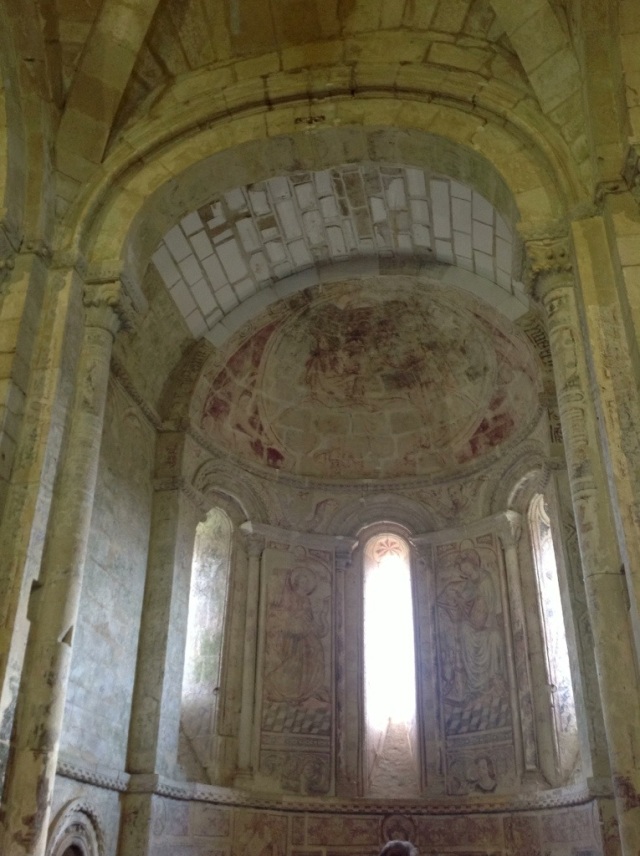 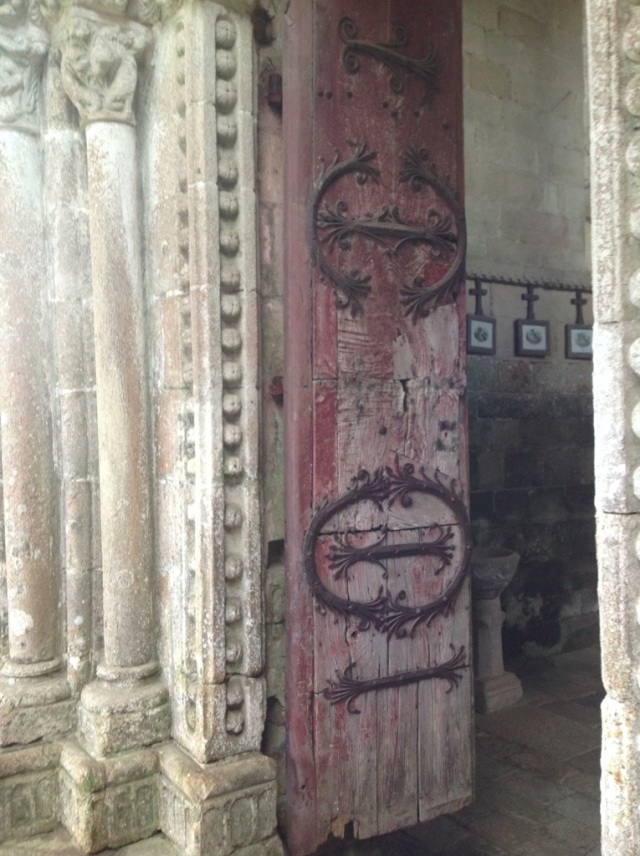 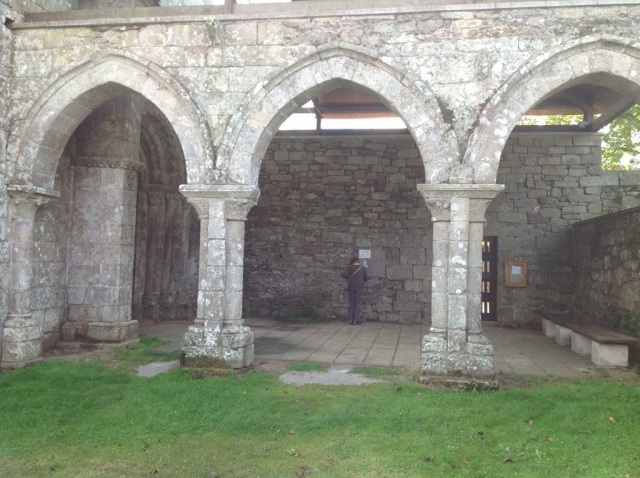 The walk to Palas de Rei was thru shaded woodlands of oak and chestnut parallel to the highway. 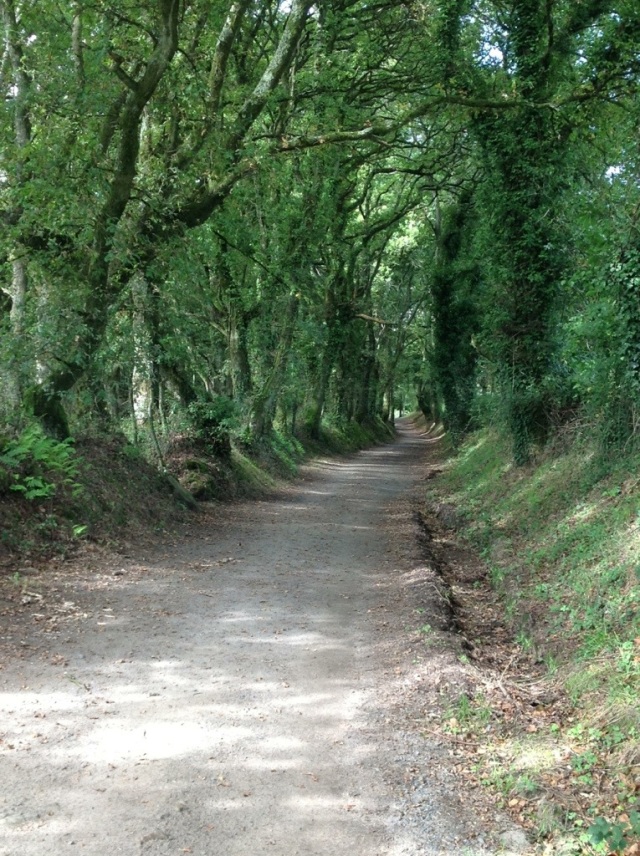 I am staying at the albergue Buen Camino in a room with one bunk bed and two single beds. I have a single bed in a corner which is ideal. The town of Palas de Rei does not have much for tourist attractions. The parts of the town I walked thru seem to be run down. Also, being a Sunday, everything closes at 2:00 pm. The afternoon was very quiet and restful but the pilgrims were loud and noisy. Hope they settle down by 10:00 pm.

Mother, ESL mentor, enjoys the beauty of nature, strives to elicit gratitude, joy and bliss day by day while on the adventure of being human.
View all posts by journeyingjoyously →
This entry was posted in Travel and tagged el Camino, pilgrim, solo, Travel, walking. Bookmark the permalink.