Posted on September 21, 2012 by journeyingjoyously

After an excellent cup of coffee, we left the hostel at 7:30 am walking thru the quiet street, past the arch of San Benito onto the bridge and through the grove of trees.

There is a legend about how that grove of trees came to be.
Charlemagne’s troops, preparing for battle with Aigolando, stuck their lances into the ground. When they awoke the next day some of the lances had grown bark and were covered in leafy branches – a sign of martyrdom. Although the lances were cut down, Charlemagne paid no heed and prepared to battle Aigolando. The omen proved true, as Charlemagne lost the battle, along with some 40,000 men. The lances again were stuck in the ground and a grove of trees grew where they had been planted.
Just as we reached the outskirts of Sahagun, there was a painted sign reading

Ultreya means onward
The walking was along an old Roman road which was very rocky and I found it hard on the feet. The terrain was flat and out in the open sunshine providing little shade. There were no rest stops for coffee or to give the feet a break. We did sit on a cement fence along the way just to have a bit of a break. All that you could do was just plod along. The road was also used by the local farmers and quite often a tractor would pass. The fields have been cut and baled.

As we were approaching the 12 km mark, we knew we should be close but looking down the road, all we saw was the road turning slightly to the right with a small hill to go over. As we approached the rise of the hill, we could make out a roof top, then another farm building, then finally in the distance the church spire so we knew our destination was a short distance away.
At 11.35 am we arrived at a private Albergue Via Trajana where we had reserved three beds yesterday.
After a rest, I wanted to see if the church was open and I needed to find a supermarket to get some food for tomorrow’s journey as there are no towns for 24.5 kms. As I was walking up the street in the direction of the church, I could smell smoke from a grass fire. I reached the supermarket and was able to get some yogurt, nuts, chocolate and a banana from the store owner.

I continued in the direction of the church and I could see in the distance the smoke from a field. The wind was quite strong so the fire must have got away from the farmer who was burning the stubble. You could see the farmer circling the fire with the tractor and as I was watching the smoke another tractor rolled by with another villager in the wagon with various tools hanging out the back. There was a small park by the church showing how the Romans crafted the roads. It was in Spanish but the diagrams showed how it was done. 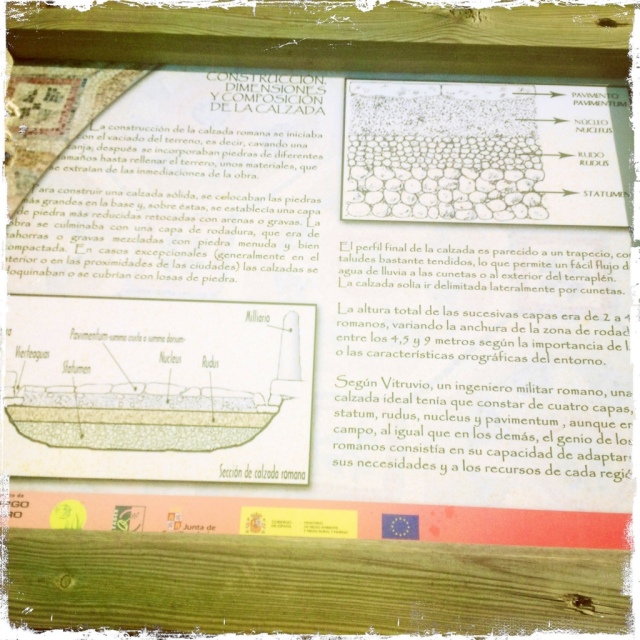 </a
The church was locked and there was no time on the door so I was not able to see inside. Walking along the streets, there were a lot of building created out of mud and straw.

I think that this is insulation and when the residents can afford the brick, the brick is put on later. I continued walking thru the village. At one end of the village there was a bar and I went in to see who was enjoying a beer hoping to see some fellow peligrinos. What I found was a card game being played by a group of village men. These are called tute cards and various games can be played. I watched for a few minutes then I resumed my walk.

I was just about back to the Albergue when I stopped to watch a little boy help his grandmother water the lovely flowers growing in the garden. There was a grandmother, a aunt, a boy and a girl sitting on the entry steps of a house enjoying the afternoon siesta. I started a conversation with the 12 year old girl named Minerva. She told me that she was learning English at school and lived in Leon but today, Friday, she was visiting her mother’s village. She asked about Canada being cold and with snow. She liked the hot temperatures of Spain. Canada would be too cold. She was a delight to talk to and she understood and translated my English into Spanish for her grandmother.

A Tribute To My Papa – Johnathan Grassmick

To the wee tiny baby boy born of Volga Russian German heritage,
To a playful, energetic boy with thirteen siblings,
To the young man with dreams and hopes of more than a sugar beet farm in rural Colorado,
To the war veteran who served the USA as a nose gunner in the South Pacific,
To the lover, husband, confidant, and companion to his wife Vivian for more than 65 years,
To the adventurer who took his young family and two week old daughter named Joy Faith to Canada to follow a new dream,
To the servant who again moved his family of seven children to the woods of Kinick, Alaska because he was asked to serve and give back,
To apprentice who studied hard to become a mechanic to provide for his growing family,
To the business man who with a strong work ethic was the best mechanic and tow truck driver serving the town of Three Hills, Alberta for many years.
To the entrepreneur who followed another dream of living in beautiful Kelowna, British Columbia, who sold his mechanic business and started a construction and excavating business leaving a legacy for his family,
To the Father, the Provider, the Disciplinarian, the Teacher to a family of ten children – five boys, five girls – all beginning with the letter “J”. John, Janet, Jerald, Joy, Jeannie, Joann, James, Jewel, Joel and Jeffery,
To the Grandpa and mentor to over thirty grandchildren and many great grandchildren,
To the retiree who travelled, visited his children and grandchildren and loved to hang out at McDonalds or play Rook, Tile Rummy, or Uno with friends and family. He was a fierce opponent,
To the aged man along with Vivian returned full circle to the town of Three Hills to enjoy familiar surroundings and be close to family and friends,
To the heartbroken man who struggled with the sudden loss of his beloved wife,
To the infirmed man who suffered with loneliness, dementia, and the frustration and limitations of a debilating stroke,
Your journey is finally over. May you Rest In Peace.
Hugs and kisses for Mom.
I am missing and will miss you forever and always, Papa.

Mother, ESL mentor, enjoys the beauty of nature, strives to elicit gratitude, joy and bliss day by day while on the adventure of being human.
View all posts by journeyingjoyously →
This entry was posted in Travel and tagged el Camino, solo, Spain, Travel, walking. Bookmark the permalink.