Posted on September 18, 2012 by journeyingjoyously

I am angry with myself but I have reached my planned destination for the day of Rabe de las Calzados – 13.3 kms. I was going to set off at first light around 7 am but my plans went awry because I didn’t wake up until 7:30. Since the hotel breakfast started at 8 am, I decided to take a few minutes, have some coffee and cheese and bread before starting my walk. It was 8:30 when I dropped the key off at the front desk and hit the streets. The city was just beginning to wake up and people were starting to head to work. It took about 50 minutes to reach the outskirts of Burgos. As I left the city there was one last bronze of St. James. 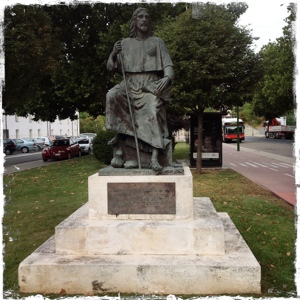 Two days of rest was probably too much as my body seemed sluggish and it was hard to set a good pace. Once Burgos was left behind the country side opened up into farmland. I walked by a field of fresh cut clover. There was that delightful smell of fresh mowed grass. Farther along a farmer with helper was baling a field that had dried a golden yellow color. It must have been feed for cows although I didn’t see any. I saw very few pilgrims on the way and there were no bars open offering coffee. 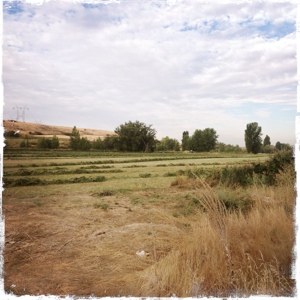 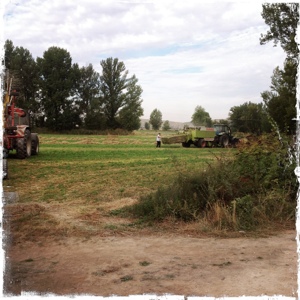 Just as I walked into the bar in Rabe, the now dynamic duo of Doreen and Chris were just getting geared up for the 8 km hike to the next village where they were planning to stay. They had had a long break and although it was noon wanted to press onward. I had decided to stay in the village and I did not want to walk 8 kms in the 85 degree heat.
This is a small village with only two private albergues. I am staying at Liberanos Domine which has only 24 beds. The bar I am sitting in is the only place in the village that has WIFI. There is some type of holiday happening today as there is no school and the courtyard of the bar is full of teenagers and town folk having a good time.

As I am sitting at the bar, I am trying to converse with the lovely 18 year old young lady tending the bar. Her name is Sorivel. Her mother is from the Dominican Republic and her father is Spanish and the owner of the bar. Sorivel would much rather be lyming with her friends but she has to manage the bar till her father returns from Burgos. 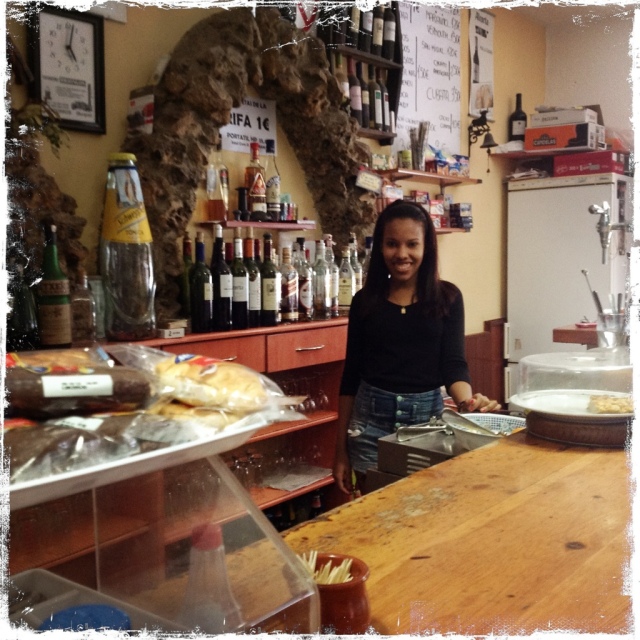 I was talking to another young man by the name of Alberto. He told me that in November he was going to Beijing, China as he could not find work as an architect. He had been out of work since he finished school over a year ago and it has been difficult to find work in Spain.

For a small village they really do know how to have a festival. I am sure the whole village has come out for this celebration from old to young.

I enjoyed the evening and was late for the 10 pm curfew.

Mother, ESL mentor, enjoys the beauty of nature, strives to elicit gratitude, joy and bliss day by day while on the adventure of being human.
View all posts by journeyingjoyously →
This entry was posted in Travel and tagged el Camino, solo, Travel, walking, women. Bookmark the permalink.