Posted on September 6, 2012 by journeyingjoyously

I did not have a good sleep. I had one of those tickle coughs and couldn’t stop coughing. Not wanting to disturb other sleeping pilgrims, I lay awake muffling my cough with my towel. Wake up was early 6 am and we started off at 7:35 am. Since there was no breakfast at this Albergue, we stopped at the first cafe open and had a cafe con leche. This leg of the journey was a distance of 19 kms, but we took a detour to to see the church that has been linked with the Knights Templar who long defended the pilgrims on the route to Santiago. The total distance walked was 23.4 kms.

Leaving Cizur Menor it is a long uphill climb passing through the middle of a long line of 30 wind turbines and upon reaching the top is a monument to pilgrims entitled Alto del Perdon, (the hill of forgiveness)

Where the wind and the stars meet
There were wonderful views of Pamplona and the surrounding hillsides. The decent was very steep and you had to watch your step. A 65 year old woman from Denmark who had just started her Camino at Pamplona, fell and had to have the ambulance called for her.

We (Rogerio, Janet and I) kept crossing paths with previous pilgrims we had met before and talked to pilgrims walking alone. It was very warm and as we made the decent from monument we stopped for lunch at Uterga. This gave me the opportunity to take my boots off and let my feet breathe. My lunch was a can of sardines and an apple followed by a few handfuls of dried fruit and nuts that I was still carrying from St. Jean Pied de Port.

Fortified by lunch and a well deserved rest, my walking companions decided to see the church at Eunate which is a 2.8 kilometer detour off the path. The path to the church went past fields of sunflowers and corn. There were also a few vineyards with huge bunches of grapes ready for harvest. And, yes, since I had already been over the hill of forgiveness, at two different times I stole two bunches of grapes. They were so delicious, sweet and juicy.

The Romanesque church at Eunate was built in the 12th century modeled on the Holy Sepulchre in Jerusalem. The church is octagonal and has a splendid freestanding outer porch with twin pillars that surround the church. The windows are created of alabaster. Tired and very hot from walking the extra kilometers, I took my shoes and socks off and let the cold water run over my feet. Also, I stuck my head under the tap which felt so good. 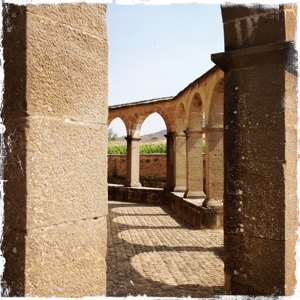 It was 4:35 pm by the time we reached Puente La Reina or Queens Bridge named such because of Dona Mayor, wife of Sancho III built the bridge to support the safe movement of the pilgrims over the river Arga, all of us were hot and tired. Thankfully the first Albergue still had bunks available. A couple from Oregon, Thomas and Carol had also been to Eunate and walked with us to Puente La Reina. The three of us women were hot, and tired and headed for the shower. We were oohing, awing as we enjoyed the hot shower. All of a sudden, someone commented, “I’ll have what they are having.” Someone else said, “Yes, this moment is better than sex” These comments are a reflection of the orgasm scene in the movie When Harry Met Sally We all enjoyed a laugh. Since we had not eaten lunch we went to the closest bar and had tortilla – like an egg and potato omelette. Since there was no WIFI at the Albergue, we needed to find a bar that had a connection. On the way we stopped at Iglesias del Crucifijo. While just a small church, the acoustic sound was outstanding, We also went inside the Iglesia de Santiago. What an ornate church. I didn’t take any pictures as a mass was taking place. Oft times the WIFI connection is poor so upload takes time or doesn’t happen at all. This bar did not have a very fast connection so my blog did not go thru.

Upon returning to the Albergue, there was just enough time to organize for the next morning. Lights were out a 10 pm.

Mother, ESL mentor, enjoys the beauty of nature, strives to elicit gratitude, joy and bliss day by day while on the adventure of being human.
View all posts by journeyingjoyously →
This entry was posted in Travel and tagged el Camino, pilgrim, senior, solo, Travel. Bookmark the permalink.